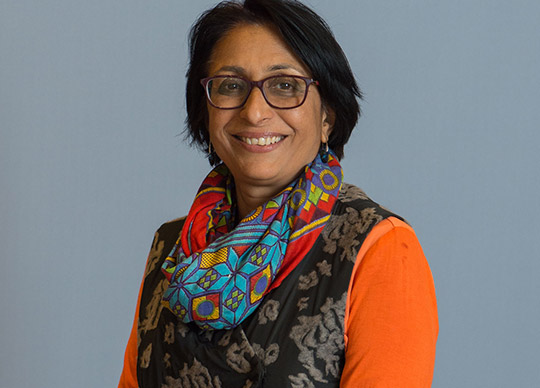 One of Australia’s leading computer scientists and researchers in the field of pattern recognition and big data, Alfred Deakin Professor and ARC Laureate Fellow Svetha Venkatesh has been elected a Fellow of the Australian Academy of Science.

Co-Director of Deakin University’s Applied Artificial Intelligence Institute (A2I2), Professor Venkatesh is honoured to become one of 22 scientists elected a Fellow of the prestigious Academy by her peers in 2021.

This latest honour follows Professor Venkatesh’s appointment as an Australian Research Council Australian Laureate Fellow in 2017 and election as a Fellow of both the Australian Academy of Technological Sciences and Engineering (2006) and the International Association of Pattern Recognition (2004).

Professor Venkatesh has pioneered many theoretical and algorithmic foundations for detecting normal and anomalous activities and deriving meaning from digital video. This underpinning theory has significantly impacted applications including automated security and video search. These contributions to theory and methods have been internationally recognised through widely-cited publications, patents, and the establishment of an award-winning global security company.

She is also the co-inventor of ASX-listed icetana (founded in 2009), one of Australia’s most successful start-ups in security and surveillance.

The technology won the 2011 WA Inventor of the Year and the Broadband Innovation Award (Tech 23, 2010) and today, icetana has clients worldwide across four continents.

Professor Venkatesh and her team also developed the TOBY Playpad for children with autism.

Professor Venkatesh filled this critical gap by inventing the TOBY Playpad, the first multimedia App to guide parents to deliver intensive therapy at home. The innovations included flexible algorithms to deliver and track stimulus for teaching early cognitive skills based on evidence-based practices. The TOBY Playpad has helped more than 8,000 children and their families around the world.

Her recent work examines how to use machine learning to accelerate the process of experimental design and is the focus of her ARC Laureate Fellowship. Collaborating with scientists and engineers from diverse fields such as material science and metallurgy, the team has invented new products and processes.