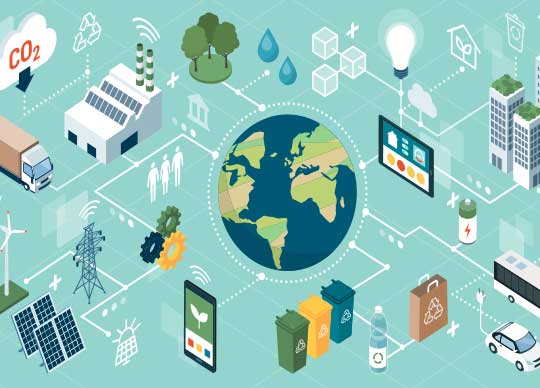 The world is becoming more urbanised, and that is having an impact on climate change. But technology, data, and clever ideas see many cities now working to tackle climate change. While often a work in progress, smart cities are exploring different ways to reduce their climate change footprint.

Cars are big contributors to greenhouse gas emissions. Reducing car usage is the holy grail for most smart cities. Good public transport is critical unless you live in a compact and flat city suited to walking or cycling.

On-demand public transport is a solution many smart cities are turning to. Passengers use an app to hail a pickup, the payment process is automated, and that pickup takes the passenger to a drop off point to connect to a mass transit system.

The world’s cities generate over two billion cubic metres of waste every year. Smart cities manage that waste in a cost-effective way that minimises environmental impacts. Recycling is part of the answer.

Planning for and smoothing out energy usage

Already, around 29% of Australian households have solar photovoltaic (PV) panels installed. Boosting solar and other renewable energy sources is a key part of any smart city. Smart cities can do that via simple techniques like rebates.

Alternatively, cities can tap into data like weather forecasts. Better forecasting of cloud cover helps cities know when solar power will be less reliable. Power loads can be planned in advance. On days when reliance on non-renewable power increases, efforts to reduce consumption can occur.

Driving smart ideas like increasing public transport, recycling, or managing energy consumption is a creative class that live and work within the city.

Smart cities foster innovation and creativity. While cities can access data, cities also need to maximise the potential in data. And sometimes, reducing a city’s environmental impact can be relatively low-tech. Sometimes it is an art as much as a science.