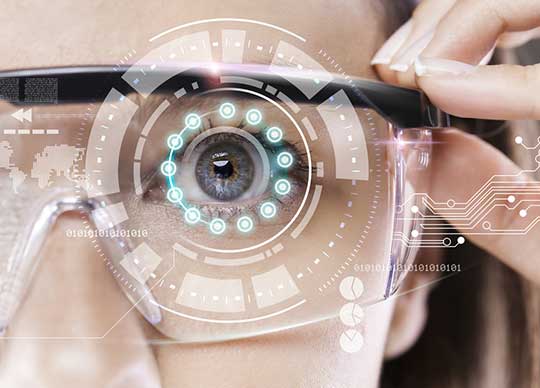 The growing functionality of wearable tech in the workforce is capturing the interest of employers worldwide. Wearable technologies can incorporate patches, fabrics, accessories, and implants. What they have in common is the potential to revolutionise the way people work.

When most people think of wearable technologies, they think of smartwatches. Improved processing power, storage capacities, and software support are making smartwatches more relevant to workplaces.

When people are out of the office, smartwatches can become hands-free verbal and non-verbal communications tools. The ability to work and use your hands while communicating, rather than holding a phone, is critical in many workplace roles. Freeing up your hands is a common attribute of wearable technologies.

Fast gaining attention are head-mounted displays (HMD) that sit a small screen just beneath your eye. Many versions have a camera attached and are voice-activated.

“It’s like a high-end Android tablet that I wear on my head,” says one HMD developer, Virtual Method’s David Francis.

Francis gives the example of a surgeon using a HMD during surgery. The surgeon can communicate and receive information while keeping their hands free to operate. HMD technologies have applications across many types of workplaces

The IoT integrated into the clothes you wear

Wearable technologies can also be incorporated into the clothes on your back. Traditionally, textile/fabric wearables have focused on the user’s biological state – heart rate, body temperature, etc. Analysts expect the textile wearable technology sector to be worth $7.1 billion by 2024, and attention is turning to the environment around the person wearing smart clothing.

Small UV sensors can now be built into clothing. For outdoor workers, the sensor can communicate with another wearable, like a smartwatch, to alert the worker when the UV levels are high. Technologies like this have clear workplace occupational health and safety benefits.

Not all wearable tech is about communicating data. Some wearables are built to assist in performing a job. Something as simple as wearing smart headphones during a phone call can improve workplace productivity by 40%.

Smart headphones are an example of accessories as wearable technologies. The wireless connection enables the worker to move around while wearing headphones. Noise-cancelling technology filters out background noises, allowing the worker to better focus on the task at hand.

Implanted microchips the ultimate wearing technology in the workplace?

At the cutting edge of wearable technologies are implants like microchips. It sounds invasive and Orwellian for many, but some workplaces are already trialling microchip implants.

US company, 32M, microchipped some employees in a trial. The microchipped employees did not have to carry around ID and swipe cards in the workplace. Epicenter ran a trial in Sweden where employees could use a microchip inserted into their thumb to send data.