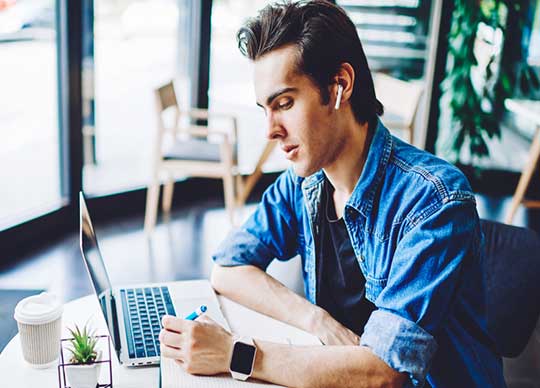 After strong double digit shipment growth in the past quarters, TWS shipments seem to be reaching a peak, with growth at 6.4%, reaching 58.3 million units shipped in Q2 2021, the lowest figure in three years. The global smart personal audio market grew 4.7% overall as shipments reached 99.8 million units in Q2 2021.

Apple saw its first decline ever showing clear signs of a slowdown. Shipments of AirPods TWS devices fell 25.7% to reach 15.0 million units in Q2 2021, contributing to the slower than usual growth of the overall TWS market this quarter. 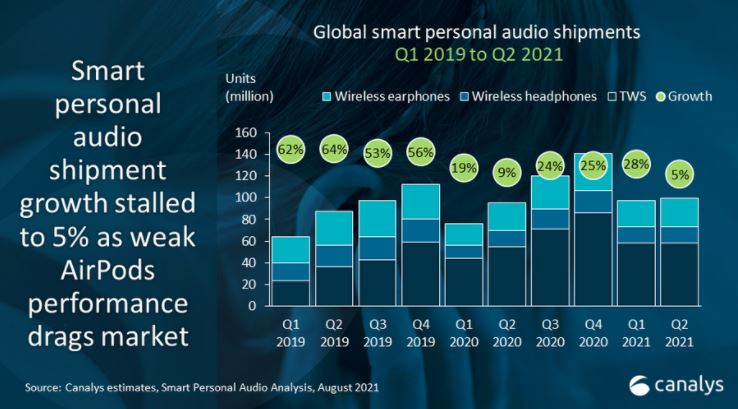 Apple still retains its lead in the TWS category, but the decline of AirPods shipments resulted in Apple’s market share dipping below 30% in Q2 2021. “Apple’s steep decline is partly due to a hard comparison to a stronger quarter last year,” said Canalys Research manager Jason Low. “Despite the ups and downs, Apple’s key advantage is clear – it has a user ecosystem that is heavily faithful to its products, and it is one of the few smart device vendors that has stronger leverage over content, which it can combine with its audio hardware to create unique experiences. The release of new AirPods in the second half of the year will prop the category up again, but the growing saturation of its iOS and macOS installed base could be a cause of worry.” 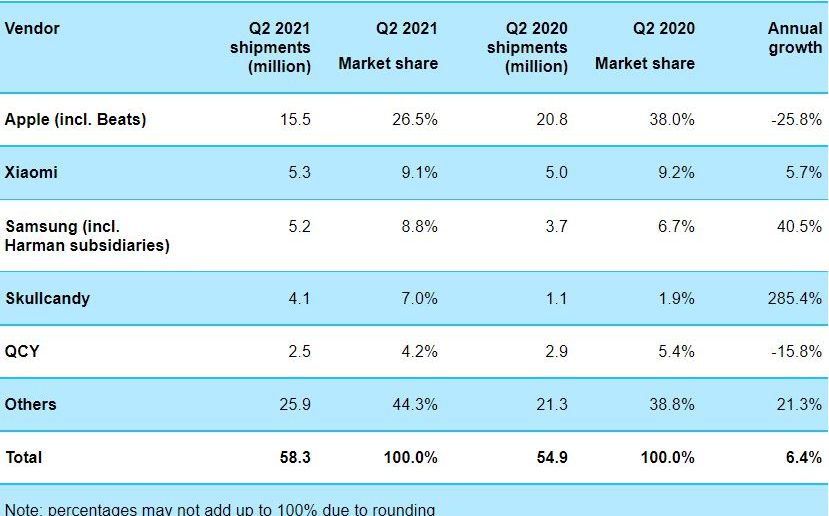 Xiaomi took second place in the TWS market, reclaiming its spot from Samsung with respective shipments at 5.3 million and 5.2 million units. Speaking about the neck-and-neck competition, Canalys Research Analyst Cynthia Chen said, “Since late 2019, the two have been evenly matched. While Xiaomi has moved up the value chain, offering more premium TWS products, Samsung is catching up by bolstering both self-branded and sub-branded TWS offerings especially with JBL under the Harman subsidiary.”

Skullcandy’s market share reached a record high of 7%, pushing it into fourth place for the first time. “Skullcandy’s success came from its aggressive pivot to an affordable and cheerful TWS lineup such as Dime, Jib and Sesh targeting a younger demographic than Samsung or Apple. Partnering with Bragi, Skullcandy claims to offer a better handsfree experience, but it will be crucial to ensure the user experience lives up to expectations, and not marketing hype,” added Low.

Wireless headphones and wireless earphones, the other two categories that make up the smart personal audio market, grew 3.0% and 2.1% reaching 15.0 million and 26.5 million units respectively.