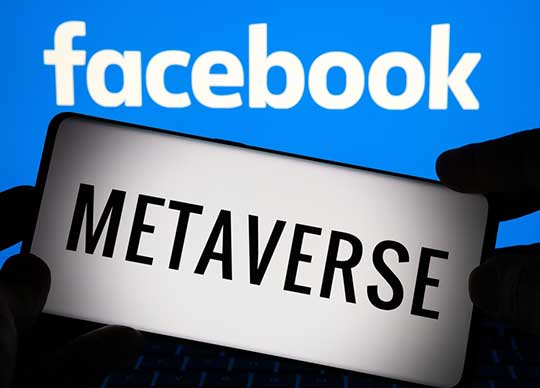 Facebook’s eponymous holding company, Facebook Inc, is to be renamed Meta. Facebook’s Mark Zuckerberg announced the change at the Connect 2021 conference on Thursday.

Platforms and apps owned by Meta – including Facebook, Instagram, Messenger and WhatsApp will retain their current branding.

“We are seen as a social media company,” said Zuckerberg on Thursday. “But in our DNA, we are a company that builds technology to connect people, and the metaverse is the next frontier.”

Facebook’s CEO says the metaverse is an online world where people can play, work, and communicate in a virtual environment. Zuckerberg says the existing brand doesn’t represent this.

“The metaverse is the next evolution of social connection,” says Meta in a statement. “It’s a collective project that will be created by people all over the world and open to everyone. You’ll be able to socialise, learn, collaborate and play in ways that go beyond what’s possible today.”

Referring to the “ultimate promise of technology,” Zuckerberg criticised the way contemporary technology is designed around apps rather than people, the tight control of online experiences, and high taxes on creative new ideas.

“This is not the way we are meant to use technology,” he said. As Facebook’s CEO promotes his vision of the online future, he says the Facebook brand doesn’t encompass everything Facebook does across its platforms and apps.

“Right now, our brand is so tightly linked to one product, it cannot possibly represent everything we do today, let alone in the future.

“Over time, I hope we are seen as a metaverse. I want to anchor our work and identity to what we are building towards.”

Earlier this week, Zuckerberg said Facebook Inc was now looking at and reporting on the business as two different segments – one for Facebook’s family of apps and one called Reality Labs for future platform work. The CEO says the new Meta name covers everything Facebook now does.

The Meta rebrand takes effect immediately. In 2015, Google made a similar change, rebranding its parent company to Alphabet. However, the Alphabet brand name has not gained significant public recognition.

The Facebook rebranding will have little immediate day to day impact on the 3.5 billion people who use its various apps. However, some virtual reality programs, including Oculus, will be rebranded as Meta.

The success of Mark Zuckerberg’s metaverse will not only depend on the creative efforts of in-house Reality Labs, it will also depend on external apps and programs wanting to join and operate within the metaverse.

Meta says it will encourage this by offering low-cost or free services to developers. The business will also invest cash in outside development work, including setting aside $150 million for developers who create new immersive learning apps and programs.

“We are still the company that designs technology around people,” Zuckerberg notes. “Now we have a new north star, to bring the metaverse to life, and we have a new name to reflect the full breadth of what we do.”