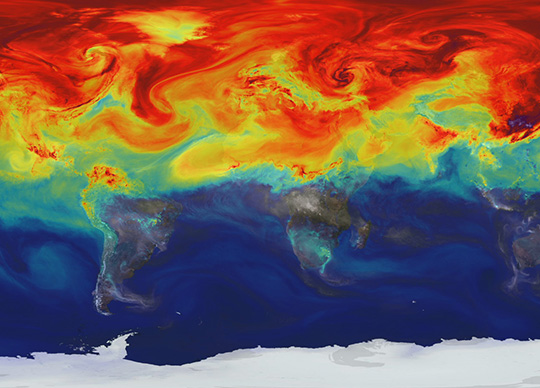 NASA supercomputer model shows how greenhouse gases like carbon dioxide (CO2) – a key driver of global warming – fluctuate in Earth’s atmosphere throughout the year. Higher concentrations are shown in red.

NASA and the Federal Emergency Management Agency (FEMA) have released a guide that provides resources for adapting to and mitigating impacts of climate change.

“NASA’s Earth observation and research supports the Biden-Harris Administration’s climate agenda, which outlines putting the climate crisis at the center of our nation’s foreign policy and national security,” said NASA Administrator Bill Nelson. “NASA is working hand in hand with FEMA to ensure communities across the U.S. and around the world have the resources they need to adapt in the face of extreme weather – which is increasing due to climate change.”

The guide is a result of the Alliances for Climate Action, which NASA and FEMA co-hosted last year, a virtual series aimed at addressing rising demand for accurate, timely, and actionable information at a time of rapid global climate change. During the series, speakers shared their perspectives and paths to bolstering collective climate action.

“To meet this moment, we need to invest in initiatives to break the cycles of disaster, damage and reconstruction,” said FEMA Administrator Deanne Criswell. “Our actions now will directly impact the future. In the past, FEMA was criticized for insufficient action on climate change. This will not be our future.”

To improve access to key information, Nelson announced a concept for NASA’s Earth Information Center, which is an opportunity for the agency to leverage its data and modeling capabilities to work with trusted government and community partners with longstanding engagement in communities most affected by climate change.

Supporting this effort are the Earth-observing missions we are flying today and building for the future. The center will complement the next generation of Earth observation satellites – NASA’s Earth System Observatory — to be launched by the end of this decade. As the next generation of missions to observe our planet, NASA’s observatory will provide a 3D, holistic view of Earth to help us better understand what our planet’s changes mean for humanity.

You can read the full guide here