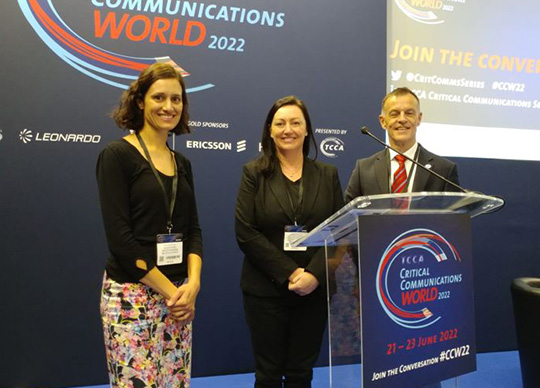 NSW Telco Authority is the connectivity leader for NSW Government and delivers critical radio communications to first responders and essential services to keep people and places in NSW safe.

NSW Telco Authority Managing Director Kylie De Courteney said it was an honour to join TCCA and become part of a global network dedicated to developing critical communications solutions. “As the connectivity leader of NSW Government, we are keen to share knowledge and develop partnerships with other TCCA members,” Ms De Courteney said.

The Telco Authority manages the Public Safety Network (PSN) on behalf of the NSW Government. Next to Australia’s triple zero emergency hotline, the PSN is the most important critical communications network in NSW and one of the largest of its type in the world.

With 65 customers including the State’s emergency services, the PSN supports more than 53,000 registered radio handsets averaging 1.33 million calls per month across 350,000 square kilometres of terrain.

The PSN’s land coverage is now 44.1 per cent of NSW and reaches 96.9 per cent of the population. It provided reliable radio communications for first responders during Australia’s 2019-20 Black Summer Bushfires and again in March 2022 when the worst floods hit the state in recent history.

The Telco Authority is also delivering one of the State’s largest investments in radio communications through the $1.4 billion Critical Communications Enhancement Program (CCEP). When complete, the CCEP will deliver a 675-site, fully interoperable network and provide coverage across 680 square kilometres and reach 99.7 per cent of the State’s population.

As of April 2022, the CCEP has delivered 249 new and enhanced sites providing critical communications for emergency services at 99.95 per cent target availability.

“It is with much pleasure as a fellow Australian to welcome the first Australian government member to TCCA,” said Kevin Graham, TCCA Chief Executive. “NSW Telco Authority has significant experience deploying and operating critical communications narrowband networks for government agencies within their state jurisdiction.

“On behalf of all Australian states and territories, the agency is also leading a Public Safety Mobile Broadband technical proof of concept trial. We look forward to the insights they can share with our community and between their many global peers who are TCCA members, and also back into the agencies they serve in Australia.”