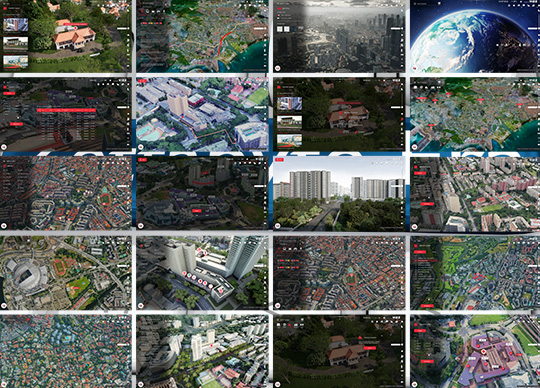 VIZZIO Technologies has announced it has unveiled what it says is its most advanced technology at the Geo Connect Asia 2022.

The Singapore-based company specialised in creating and virtualising digital realities, led by Dr Jon Lee, founder and chief executive officer, presented the world’s largest digital twin of a country to Guest-of-Honour, Mr Edwin Tong, Minister for Culture, Community and Youth and Second Minister for Law, Singapore, when he visited the VIZZIO booth after the official opening ceremony of the 2-day event. Also present at the event were members of ASEAN’s geospatial community.

VIZZIO “cloned” the entire Singapore by building a digital twin using AI, with photoreal renditions from aerial to building to street level to indoors, in a seamless interactive 3D tour. The 1:1 scale version of 3D Singapore, modelled using satellite imagery and AI and divided into 1 square meter tiles, totalling 728,000,000 tiles, was created in less than two weeks. VIZZIO has the capability to clone Planet Earth on a global scale which is both dimensionally accurate and incredibly robust, that is ready for use by government and commercial entities.

The company developed DEEP generative models to learn to synthesise realistic images from 64 global sources and can map any city in the world, without the need of sending photogrammetry drones.

VIZZIO’s AI-based 3D City Modelling technology called “GEO EARTH” is the brains behind a vast semantic 3D world, built entirely using satellite imagery and A.I. Essentially GEO EARTH has a canny understanding of what different buildings look like from an aerial view, even in suboptimal lighting and incomplete imagery. The machine learning system VIZZIO built has the ability to extrapolate from imperfect outlines by taking into consideration the neighbourhood (residential versus commercial), roof type (slanted versus flat), and other factors such as the presence of air conditioning units and more. With the aid of these data, the algorithms create a plausible 3D reconstruction of buildings and even entire cities. VIZZIO’s Geo Earth overcomes the challenge of being not just accomplishing this not once but a billion times on a regular basis, in order to create an up-to-date 3D representation of every building on planet earth.

Having this ability to update 3D models of cities regularly based on new imagery from satellites is crucial to business propositions. The 3D map data, such as those currently seen in Google and Apple’s maps, is based on photogrammetry, aerial photography combining multiple aerial images and comparing parallax data (much like our eyes do) to determine size and depth. This requires huge efforts to fly drones and 3D software to touch up and optimise the city models.