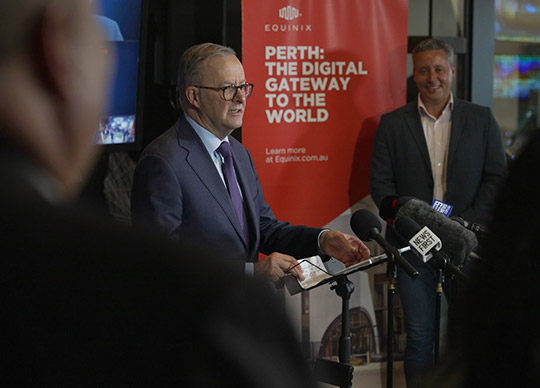 Mr Albanese said the new OAC system (Oman-Australia Cable) built by Australian owned and operated company SUBCO would be a gamechanger for Australia – enabling direct ultra high-speed data connectivity from both the East and West Coasts of Australia to the Middle-East and Europe for the first time.

“Ensuring Australian businesses and industry can share data quickly and securely to global markets has never been more critical to our country’s economic future.

“For the first time WA will now be directly connected to the Middle-East, Indian and European markets through a 9,800 km optical fibre system providing WA with its own international data super-highway.

“This Oman Australia Cable opens up a new secure and low latency express route between Australia and EMEA and is the only cable that avoids other legacy systems built in heavily congested waters including the Malacca and Sunda Straits as well as South China Sea,” Mr Slattery said.

“As a result, all of Australia will now have access to improved network performance and reliability through this completely new route to the Middle-East and Europe from Australia.”

Omantel CEO Mr Talal Al Mamari said Omantel is delighted to be the trusted landing partner for the Oman Australia Cable and have worked closely to support SUBCO achieve their vision.

“Omantel has successfully utilised the unique geographical location of Oman to create a global telecommunications hub centred between the Middle East, Africa and Europe,” he said.

“We collaborate with partners such as SUBCO to build a more resilient and efficient connectivity for everyone. OAC is another example demonstrating our successful wholesale strategy.”

Equinix President and CEO Charles Meyer said the company was delighted to be the provider of Cable Station facilities for SUBCO in the fast-growing markets of Perth and Oman and welcome OAC to the Equinix ecosystem.

“This partnership illustrates how Equinix enables the critical infrastructure that powers the internet and we look forward to a long relationship together as Perth is poised to become a major hub.

“As the world’s largest digital infrastructure company, we will always be where our customers are. The OAC Cable Landing Stations in Perth and Oman will provide organisations with access to a dense ecosystem of networks and the lowest latency and most direct path between Australia and onward into Europe.”

SubCom which supplied and installed the OAC system on behalf of SUBCO and its partner were proud to deliver this new system.

SubCom CEO David Coughlan noted; “When our company was entrusted as the supply partner for the Oman Australia cable in March 2020, we were certainly excited, but also a bit cautious given how much we didn’t yet know about the pandemic and the obstacles it would present,” he said.

“However, all parties remained fully committed to the ultimate success of the project and I am proud of our entire team for its creativity and perseverance during extraordinarily challenging circumstances.

“SubCom is pleased to play its part in making OAC a reality and we extend our congratulations to SUBCO and its partners.”