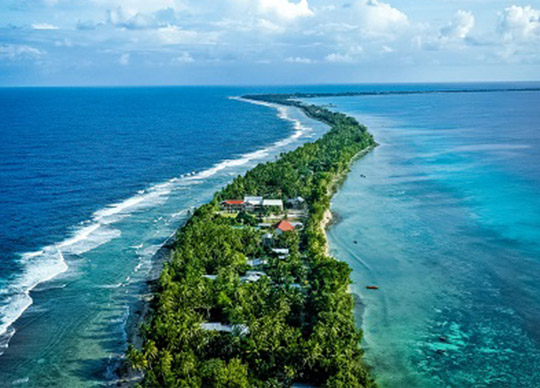 Tuvalu is a low-lying Pacific nation currently experiencing the effects of a global sea level rise caused by climate change and expected to be underwater in a matter of decades due to global inaction. As a result, Tuvalu could be the first completely digitised nation in the metaverse as the country works to ensure a future, even after their land is washed away.

For years now the small island nation has been asking world leaders to act and adhere to commitments made in the 2015 Paris Agreement. This year Simon Kofe, the Minister Justice,

Communication & Foreign Affairs of Tuvalu, arrived at the UN Climate Change Conference (COP27) with a different message: that it is time to look at alternative solutions to save his country, highlighted in the Future Now Project – a proactive stance toward the worst case-scenario.

The Hon. Simon Kofe, said: ‘As a progressive nation, we are excited at the opportunity for Tuvalu to exist in the metaverse – but not to the extent of losing our lands. The tragedy of this outcome cannot be overstated. But because the world has not acted, we must. Tuvalu could be the first country in the world to exist solely in cyberspace – but if global warming continues unchecked, it won’t be the last.”

“The world’s inaction means that our pacific region must take greater action and forge our own path as leaders on the international stage, but our action alone cannot stop the current trajectory of climate change.”

Kofe’s COP27 speech unveiled a striking visual that only begins to tell the story of the first ever country to seek digital sovereignty in order to preserve its culture, place, identity, and statehood status under international law. The minister delivered his speech to the world from the digital twin of one of the islands, which has been built by Accenture.

The government of Tuvalu intends to build digital replicas of all of Tuvalu’s islands; an accurate, visually immersive virtual model of a real-world environment. His speech was a reminder that because their repeated calls for action have been ignored, Tuvalu must take urgent measures to ensure a future for the country, its people and its culture.

Minister Kofe is calling on global citizens to assist Tuvalu by holding their own governments accountable to existing commitments to the Paris Agreement. As part of the campaign, Tuvalu has created a dedicated website that includes pre-written letters of action for people to send to their local government representatives.

While countries continue to work towards making the big decisions that will limit climate change, Tuvalu is beginning to work out how to catalogue, map, record and save as much of their island life as possible. Historical documents, records of cultural practices, family albums and the traditional songs are just some of the things that will be making their way to the metaverse.

Tuvalu is also looking at how to digitise its government administrative system, shifting its operations online so that it can continue to fully function as a sovereign state. It is also considering legal avenues to ensure the permanency of statehood and maritime boundaries even as sea levels rise. These are the first steps in a long, yet inevitable, process.