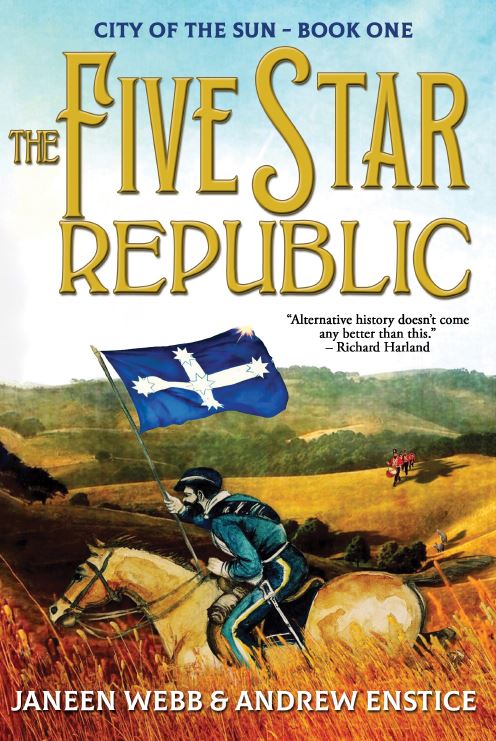 Plans have been announced for a massive new solar array. Based on the Ericsson Sun Engine, this privately-funded, government-approved project will power a brand new city in the desert.

The cutting-edge solar array will feature clean, steam-driven technology, reviving the fortunes of manufacturing in Australia at a critical time.

This is the storyline of The Five Star Republic. It is inventive and absorbing, nineteenth century Australian history, with a twist. It is the culmination of eight years work for multi- award winning author Dr. Janeen Webb and fellow literary historian Dr. Andrew Enstice.

“To create The Five Star Republic series, we explored a myriad of historical sources to create an alternate Australian history,” said Dr. Webb. “Sources such as the State Department archives in Washington and Cornish archive Kresen Kernow. We discovered some extraordinary stories, and realised just how close we came to having a very different future – a clean, green revolution powered by the sun,” she continued.

The Five Star Republic is firmly grounded in actual events of nineteenth century Australia including the Eureka rebellion, the overland telegraph, the solar-powered steam engine and the Colt-wielding California Rangers. It is the first in a series of novels by the two authors, due for release from Queensland-based publisher IFWG. “If we look to the past, to imagine a future powered by solar energy for more than
a hundred years, we can see a very different Australia,” added Dr Enstice.